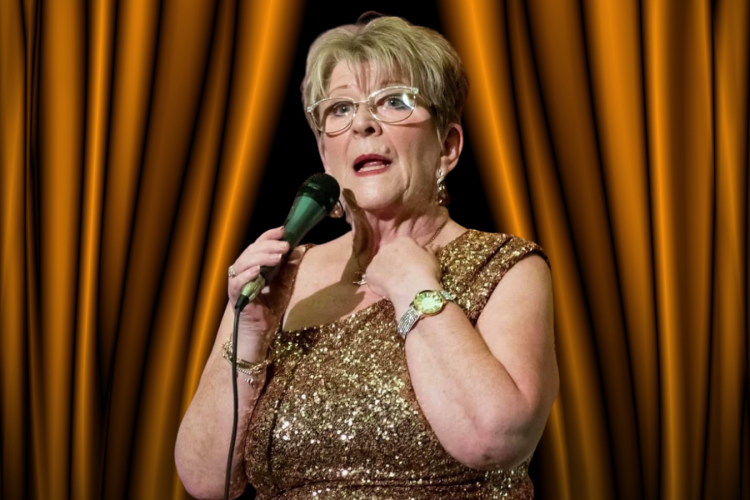 Pauline Daniels needs no introduction on our shores – she is a seasoned professional in theatre, music and comedy.

At the beginning of the first lockdown, Pauline took to Facebook to broadcast Shirley Valentine live from her kitchen to keep folk entertained and entertain she did. No audience, no feedback, just talking to a black screen. A really difficult gig. It was so good and, in my opinion, deserved way more recognition that it got.

Pauline has been forthcoming with her views on Facebook in the wake of the lockdown regarding the lack of support for the performing arts. She received a £300 one off payment from the Variety charity, not a huge amount, but it paid a bill and it was the ONLY help she has received throughout the pandemic. An appearance on the Royal Variety performance to talk about how the Variety charity could help others in the same situation made her the voice of our community and Pauline let the UK know that pubs, clubs, singers, dancers, actors, lighting crew and many others had been forgotten in the government’s handouts.

In a funny way, Pauline is about to become the voice of another community, an inner-city community, starring in a musical called Homebaked. I called her for a chat last week and asked her for more details.

“I had a telephone call from the Red Ladder Theatre Company and was invited to meet the director and writer, Boff Whalley of Chumberwumber fame, you know the song, I get knocked down, but I get up again? Well, he asked me to be in his new musical, Homebaked.

Homebaked is a real bakery in the shadow of Anfield’s Kop and is the setting for this tale of inner-city life, the people, and their community. During lockdown the real bakery have been supplying free meals to their locals, looking after their own, if you will.

I am playing Annie, the lady who runs the bakery and suggested that I went along to meet the real-life Annie, Ange. The director wished me luck as he told me she never sits down!

Homebaked is not intended to be a political piece although there are political undertones. It is basically a working-class musical, a story about people and their community in the middle of a pandemic and about them pulling together to help each other. Although it is set in Liverpool, the spirit is true of every city, but it is great to be starting in our great city. Great too for the Royal Court Theatre. It was 2011 the last time I was there, and I am really pleased that Red Ladder will attract national press to the launch. A real boost. We want people to come along, watch it, enjoy it and on the way home think about the meaning behind it.

On a personal level I am so grateful for the role. It couldn’t have come at a better time. There have been some dark days during lockdown, and I have seen many friends throw in their creative towel to take on a different career path as they felt there was no hope for our industry. I felt the same having to move my National Tour, I started to think it would never happen. It is by the way; I’ve rescheduled it to next year.  I just want to say there IS light at the end of the tunnel, you see, WE GET KNOCKED DOWN BUT WE GET UP AGAIN!”