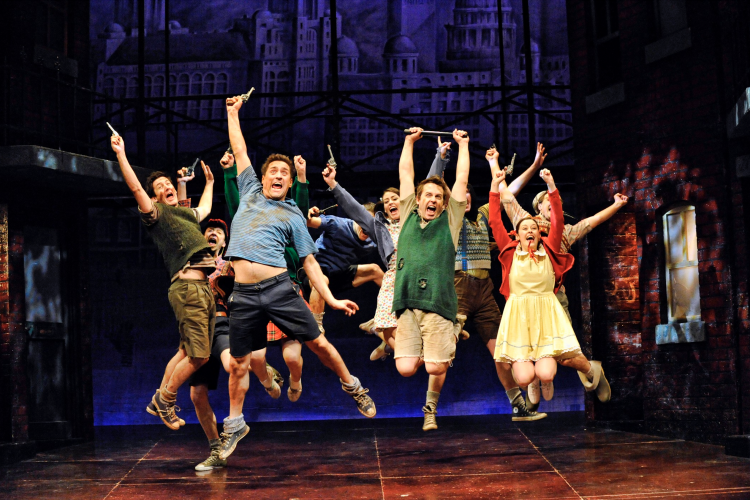 Daniel Taylor is an award-winning actor, producer, director, singer songwriter and dad who trained at Webber Douglas Academy of Dramatic Art in London.

He was destined to be a snooker player until fate played a part and a YTS scheme guided him onto the stage. It was love at first sight for Dan and after auditioning for many drama schools he was finally accepted at a London school and given a grant.

All too often young talent goes unnoticed, but this gem shone brightly when the red curtains opened. Dan went on to produce, direct and perform as Bottom in A Midsummer Night`s Dream and Tybalt in Romeo and Juliet, both for The Epstein Theatre, Liverpool. He directed a production of Macbeth which will return to the Epstein Theatre this year after success as far afield as Singapore.

He has played John Lennon in Lennon-Through A Glass Onion which embarked on a UK tour including the Edinburgh Fringe Festival in 2020 and an international tour spanning 8 countries finishing in LA. Yoko Ono was involved in the production. 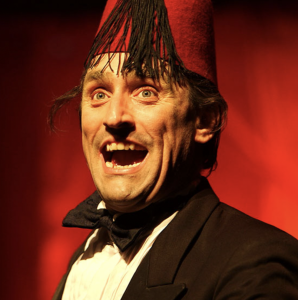 The Very Best of Tommy Cooper is an hilarious one-man show written, produced, and performed by Dan. It focuses on Tommy Cooper’s legendary comedy act, recapturing his trademark mayhem and misfiring magic. The hour-and-a-half show includes many of Cooper’s beloved one-liners, dazzling wordplay and celebrated tricks, including Glass/Bottle, Dappy Duck, Spot the Dog and Jar/Spoon. The Production has the blessing of the Tommy Cooper Estate and has won critical acclaim.

Whilst starring in a Christmas production of Jack and The Beanstalk at the Liverpool Empire three and a half years ago, Dan met and fell for a Wallasey girl.  Shirley Ballas was a Latin World Champion and is now a TV judge on Strictly Come Dancing. Shirley has openly said that her and Dan laugh a lot and they are very much in love. The thing that shines through for me is the respect they have for each other’s’ career. It is refreshing to see in showbiz and it is evident on their social media.

Dan’s busy theatre schedule will see him play one of music’s most understated stars, George Harrison in Something About George later this year. Featuring beautiful songs like My Sweet Lord, Something, and Handle with Care, the show includes incredible solo material and music from rock ‘n’ roll’s greatest supergroup, The Travelling Wilburys – not forgetting more than a few Beatles’ hits along the way. From heartbreak to hedonism, and song writing to success, Something About George will show you a life that was anything but quiet.

Currently on a UK tour with Blood Brothers, Dan is playing Sammy, Mickey’s older brother. Few musicals have received quite such acclaim as the multi-award-winning Blood Brothers. Bill Kenwright’s production surpassed 10,000 performances in London’s West End, one of only three musicals ever to achieve that milestone. Written by Willy Russell, the legendary Blood Brothers tells the captivating and moving tale of twins who, separated at birth, grow up on opposite sides of the tracks, only to meet again with fateful consequences.

Don’t be surprised if you have seen Dan’s face before but not in a theatre. He has starred in TV shows such as Brookside and The Bill and can often be seen between the programs in the adverts. He is also no stranger to the big screen and indeed has just finished filming the movie Swastika Sanket in which he plays Adolf Hitler. 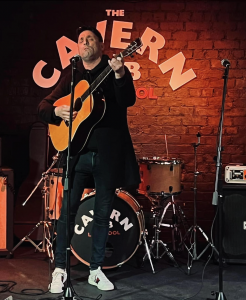 When he is home in Merseyside, he likes nothing better than to get up at the Cavern on a Monday night. Ian Prowse of Amsterdam and Pele, hosts a very successful club for singer songwriters and Dan can be found with guitar in hand, belting out a tune or two. He is no stranger to music and is currently recording an album in Glass Studios with another name you may know, Gary Murphy. Gary and I go way back. In fact, it was with Gary that I first played a theatre. He is an incredible musician and a well-respected producer. The combination of their talents will certainly produce a great sound. I had a cheeky listen to one of the rough takes, Sonny Days and really loved it. It is catchy, has a great melody and immediately puts you in a good mood.

There are many reasons why you would like Dan Taylor, in fact any one of the reasons above. The reason I like him is that he is a normal guy who has a passion for his craft and gives back. He has never forgotten that he was given a grant to go to drama school and now with Daniel Taylor Productions he works to make Shakespeare accessible within many educational settings.

“We want to make sure that as many young people as possible have a memorable experience of theatre and that the creative art of storytelling remains an essential part of their education”.